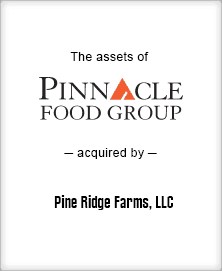 Brown Gibbons Lang & Company (“BGL”) is pleased to announce that it has recently completed the sale of Pinnacle Food Group (“Pinnacle” or the “Company”) to Pine Ridge Farms LLC, a newly formed entity controlled by BMI Group (“BMI”), an agricultural advisory and merchant banking firm based in Kansas City, MO. Based in Des Moines, Iowa, Pinnacle is the largest privately owned processor of “heavy hogs,” or breeder stock, in the United States.

Ultimately, the transaction was executed through an Assignment for the Benefit of Creditors proceeding, a statutory device by which a corporate debtor conveys all of its assets to a third party (the “Assignee”) to be liquidated and distributed pro rata to the creditors of the Debtor. BMI won the auction held on December 15, 2003 with a purchase price of approximately $22.5 million (subject to working capital and other adjustments). On January 26, 2004, the Assignee consummated the sale of essentially all of the assets of Pinnacle Food Group, including Iowa Packing Company, Rosewood Farms LLC, and Foresure Transport. BMI Group funded the acquisition with equity and senior secured notes funded by the existing bank group. “This was certainly a challenging engagement,” said Steve Miles of Brown Gibbons Lang & Company, “but it proves that when all parties are patient and work together toward a common goal, an optimal outcome can be achieved.”

In executing this difficult assignment, BGL was able to combine its extensive knowledge of the food and beverage industry and its bankruptcy restructuring experience to formulate and execute a transaction strategy that salvaged the ongoing business of Pinnacle, maximized the bank group’s recovery, and preserved more than 200 jobs around the holiday season.

Brown Gibbons Lang & Company is a leading independent investment bank serving middle market companies and their owners throughout the U.S. and internationally. BGL’s professionals are experts in mergers & acquisitions, debt & equity placements, and financial restructurings, and were named “2003 Deal Makers of the Year” by The Mergers & Acquisitions Advisor.

< Back to All Press Releases
Link to bio for John R. Tilson