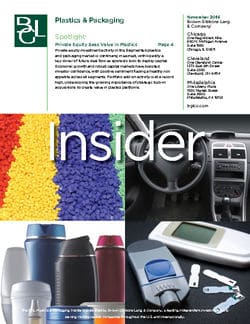 Private equity investment activity in the fragmented plastics and packaging market is continuing in earnest, with liquidity a key driver of future deal flow as sponsors look to deploy capital, according to BGL’s November 2016 issue of the  Plastics & Packaging Insider industry report.    Economic growth and robust capital markets have boosted investor confidence, with positive sentiment fueling a healthy risk appetite across all segments.

The BGL report, now available online, examines developing trends in private equity, which has invested in more than 400 plastics and packaging businesses over the last decade and currently manages an inventory of more than 200 companies:

Valuations are strong. In a tepid economy, private equity and corporate buyers are tapping bulging capital stores and aggressively competing for acquisitions to accelerate growth beyond organic means.

Private equity portfolio companies are aged and will have to come to market. With insatiable demand for quality platform assets and add-on acquisitions at a record high, today’s exit window is particularly advantageous. If sponsors wait too long to monetize aging portfolio investments, there may be a rush to market which could have a dampening effect on valuations because buyers will have more choices.

Surplus capital and strategies of acquisitive growth expected to drive new platform and add-on activity in the plastics sector in the coming quarters, in line with growing interest in industrial businesses:

Pritzker Private Capital reached an agreement in October to acquire ProAmpac, stating its plans to use acquisitions to grow the platform. The buy represents an entry into the flexible packaging market, which the sponsor views as ripe for consolidation.  Pritzker also backs Technimark, which acquired Ci Medical Technologies in December 2015 to aggressively grow its newly formed medical business, Technimark Healthcare.

Mason Wells picked up MGS Manufacturing Group this May, a custom injection molder that counts healthcare among its major markets and looks to expand its global footprint into Europe and Asia.

​Portfolio exits are on the rise, with current favorable market conditions likely to drive more sale activity. BWAY Corporation traded hands in August with Stone Canyon Industries emerging as the successful bidder. Phillips-Medisize, backed by Golden Gate Capital, announced in August it is selling to Molex, a subsidiary of Koch Industries.

< Back to All Research
Link to bio for Andrew K. Petryk