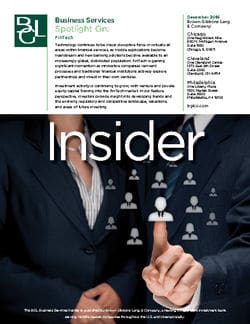 Technology continues to be major disruptive force in virtually all areas within financial services and is transforming the way consumers and institutions manage their funds and accounts.  In response to growing customer demand and the emergence of user-friendly technology, FinTech has been gaining significant momentum and is expected to be an even greater force in the coming years.

The BGL Business Services Insider report examines the new technology environment in financial services, supported by findings from a roundtable of leading investors in the space. Secular trends point to continued robust growth in the FinTech market, validated by the long-term shift of consumers to online and mobile and the migration of software services into the cloud. “From mobile payments to online lenders and wealth management tools to new methods of transferring money in an increasingly global population, FinTech today enables a much larger percentage of the population to access financial services,” offered Ryan Goldenberg, a vice president at LLR Partners, a participant in the report. Innovative companies are reinventing processes, and traditional financial institutions are actively exploring partnerships and investing in their own ventures.

Capital inflows have contributed to rising valuations in the sector, with venture capital and private equity investment reaching decade-highs in 2015. FinTech has attracted more than $41 billion in venture capital since 2005, including $12 billion raised in 2015, while private equity sponsors closed a record number of transactions the same year. “As long as interest rates remain reasonably low, leverage remains available, and there is steady demand for FinTech assets from cash-rich strategics and private equity firms, we think valuations are likely to persist in the near-term for high recurrence SaaS businesses that are growing at 20 to 30 percent-plus,” offered Lance Fenton, a partner at Serent Capital. “Growth, forward visibility, and scalability often drive premium valuations. Higher valuations are also being driven by a surplus of capital relative to attractive assets and increasing innovation,” Goldenberg said. “Total funding to FinTech companies in 2016 is still on pace with the 2015 peak, and we don’t see any material, near-term change in activity, as technology innovation in financial services has ample white space ahead.”

< Back to All Research
Link to bio for Peter J. Hill