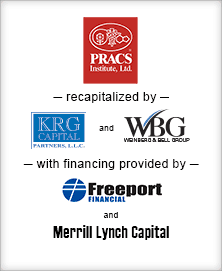 Brown Gibbons Lang & Company announced today that the recapitalization of PRACS Institute, Ltd. was selected as the Financing Deal of the Year in the Healthcare-Biotech category by The M&A Advisor, a leading publication dedicated to middle market merger and acquisition activity. The winners were named during The 15th M&A Advisor Conference June 20, 2006, in Chicago.

PRACS Institute, Ltd. is a rapidly-growing provider of contract research services to the pharmaceutical, biotechnology and skin care industries. Late last year BGL was engaged by The Weinberg & Bell Group, a Cleveland-based investment firm, to identify an equity sponsor and to secure debt financing in support of the leveraged recapitalization of PRACS.

The Weinberg & Bell Group and KRG Capital Partners provided equity capital, and debt financing was sourced from Merrill Lynch Capital and Freeport Financial. BGL put the entire transaction together in less than 12 weeks.

“This transaction began as a fast-moving, complex opportunity, and through skillful management of the process, is likely to generate substantial value for the investor group,” said Nir Gabriely, director at Brown Gibbons Lang & Company. “It also allowed PRACS’ founder to realize a significant liquidity event while remaining CEO and a meaningful shareholder.”

BGL has been honored by The M&A Advisor for four consecutive years, including:

Brown Gibbons Lang & Company is a leading independent investment bank serving middle market companies and their owners throughout the U.S. and internationally. BGL’s professionals are experts in mergers and acquisitions, debt and equity placements, and financial restructurings. BGL is the U.S. partner firm in Global M&A, one of the world’s leading partnerships of top-tier, mid-market, cross-border investment banks. Global M&A was named 2005 Investment Bank of the Year by The M&A Advisor. For more information, please visit www.bglco.com.

< Back to All Press Releases
Link to bio for John C. Riddle