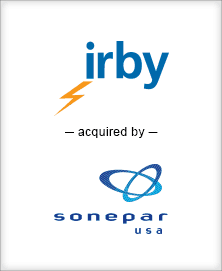 Brown Gibbons Lang & Company (BGL) today announced the sale of its client Stuart C. Irby Co. (Irby), to Sonepar USA, a subsidiary of the Sonepar Group (Paris, France), the largest privately-held electrical distributor in the world. Following a broad, international and highly competitive auction, BGL generated one of the highest EBIT and EBITDA multiples ever paid for an independent distributor of electrical products.

Founded in 1926 in Jackson, Mississippi, Irby is one of the largest and most widely recognized electrical products distributors in the U.S. and the dominant value-added wholesaler of electrical and related products to the utility, commercial, contractor, and industrial markets in the regions it serves. With $400 million in sales, the company distributes more than 750,000 individual items from many of the world’s largest and most respected manufacturers from 35 branches in the south central and north east regions of the U.S.; including Mississippi, Tennessee, Alabama, Florida, Arkansas, Louisiana, Texas, Oklahoma, and New York. Prior to the sale, Irby had been family-owned since its establishment 79 years ago.

Irby’s shareholders, who include three generations of the Irby family, sought an advisor to maximize the company’s value for estate and wealth diversification. The shareholders of Irby engaged BGL to manage the sale of the company due to BGL’s extensive experience in the industrial and electrical distribution industry. Irby (a “top 20” electrical distributor) represents the 14th electrical/industrial distributor that BGL has represented or is currently representing in a financial advisory capacity.

Charles L. Irby, a principal shareholder and chairman of the board of Irby, said, “We originally approached BGL nearly two years ago about selling our company. To our surprise, they recommended postponing the sale process and laid out a road map that would allow our shareholders to maximize value. Over the past several months, BGL worked seamlessly and tirelessly with our legal and tax advisors, our management team and the Irby family and managed an incredibly thorough and meticulous process that resulted in the optimal transaction for our family, the company and its employees.”

Charles L. Irby concluded, “The Irby family can unequivocally recommend BGL to anyone wishing to recapitalize or sell their company. BGL is simply the most dedicated, hardworking, knowledgeable and ethical investment bank we have ever seen.”

James C. Miller, managing director and principal at BGL, said, “Sonepar won a hotly contested auction that included dozens of competitive bidders — both strategic and financial. They had to pay a premium to acquire the company, but they were not alone and the company was well worth it, as Stuart C. Irby Company represents one of the top five privately-held platforms in the U.S. in this sector. Despite all the recent advances in e-commerce, electrical distribution remains largely a ‘people business.’ Great companies in this industry are built on great people, and the Irbys are the best. It was an honor and privilege to work for a family and a company of this caliber.”