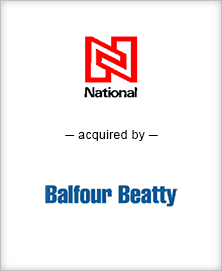 The investment banking firm of Brown, Gibbons, Lang & Company, L.P. (BGL) announced it has completed a controlled auction for the sale of National Engineering & Contracting Company (National) to Balfour Beatty plc (BBY) for $25 million in cash and assumed debt, plus an earn-out. Balfour Beatty plc is a $3.5 billion engineering and construction services firm based in the United Kingdom. Its U.S. civil engineering division generated sales of $340 million in 2000 and ranks among the top 20 U.S. civil engineering companies.

Established in 1933, National is a $105 million heavy construction and contracting firm based in Strongsville, Ohio. It is ranked the 17th largest bridge building contractor in the United States by the 2000 Engineering News Record’s Top 400 Contractors Sourcebook. National provides engineering and construction for public works and specializes in bridges, water treatment plants and telecommunications towers.

“National engaged BGL to evaluate its strategic alternatives and to determine the range of value it could command in the marketplace,” said Michael E. Gibbons, BGL senior managing director & principal.

“After assessing National’s strengths, we conducted a controlled auction with a limited number of possible acquirers for the Company that included a select group of domestic and international buyers. We approached Balfour Beatty because of its complementary geographic reach in the United States and its position in the civil construction sector.”

Kathryn R. McLaughlin, BGL vice president who managed the sale process, said, “By acquiring National, Balfour Beatty gained immediate access not only to nearly 70 years of construction project experience, but also to a strategically-located and firmly-established Midwest customer base. We also negotiated the terms of the transaction to enable National’s key management team to participate in the future success of this strategic initiative.”

Brown, Gibbons, Lang & Company is a Midwest-based investment banking firm serving middle market businesses nationally and internationally. In the past four years, BGL has completed more than $3 billion of M&A transactions, more than $600 million of institutional private placements, a dozen corporate restructurings, and has sponsored and financed three successful industry roll-ups. The firm has more than 25 investment banking professionals with offices in Chicago and Cleveland.