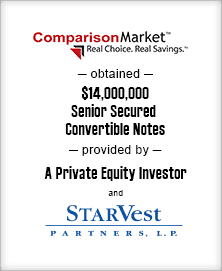 The Company is growing rapidly. This growth translates into growth of an “off balance sheet” asset of quantifiable customer renewals, which creates an annuity stream of yearly cash flows. BGL and ComparisonMarket were able to create a security structure that essentially enabled the securitization of these cash flows into a quantifiable and borrowable asset. In July of 2003, BGL negotiated and placed a $20 million senior secured credit facility through Provident Bank, a Provident Financial Group, Inc. subsidiary.

David L. Roush, Chief Executive Officer of ComparisonMarket said, “We are extremely pleased with the new financial instrument as it reduces our cost of capital, increases our cash flow and protects all shareholders from dilution. The fact that we can finance the growth of ComparisonMarket using low-cost debt instead of equity capital demonstrates the successful accomplishments and maturation of our business. It will further enable us to achieve our profitability goals.”

For the equity raise, BGL cultivated interest from several traditional venture capital firms. Ultimately, a subset of the Company’s existing shareholders reaffirmed their commitment to ComparisonMarket and funded an additional $8 million in the form of convertible notes on market terms. In addition, StarVest Partners, L.P. invested $4 million on similar terms.

Commenting on the transactions, Scott T. Berlin, Director at BGL said, “We are very happy with the outcome of the capital raises. By recognizing and marketing a unique debt security structure, we were able to lower ComparisonMarket’s cost of capital and protect its shareholders from dilution. Further, the investment made by StarVest Partners, L.P. represented an additional market validation of ComparisonMarket’s business model. We enjoyed working with an emerging growth company in Northeast Ohio with such a well-developed business model and strong entrepreneurial management team.”

David L. Roush, Chief Executive Officer of ComparisonMarket commented on BGL’s involvement in the transactions by saying, “BGL demonstrated creativity and tenaciousness in raising both debt and equity capital in an effective, thorough and timely manner. Their proactive involvement enabled our management team to focus on our business, not on the capital markets. This was especially important given the recent accomplishments and growth cycle of ComparisonMarket. In addition, the fact that BGL was able to finance a portion of our growth capital needs with a creative lower cost debt instrument was obviously beneficial to all of our shareholders, including our management team and employees.”

ComparisonMarket, Inc., based in Cleveland, Ohio, empowers consumers with instant, accurate comparative auto insurance quotes that they can buy through licensed agents or on-line. The service is private labeled on behalf of leading financial institutions and marketed directly to consumers through insurance.com. For more information, please go to www.comparisonmarket.com.