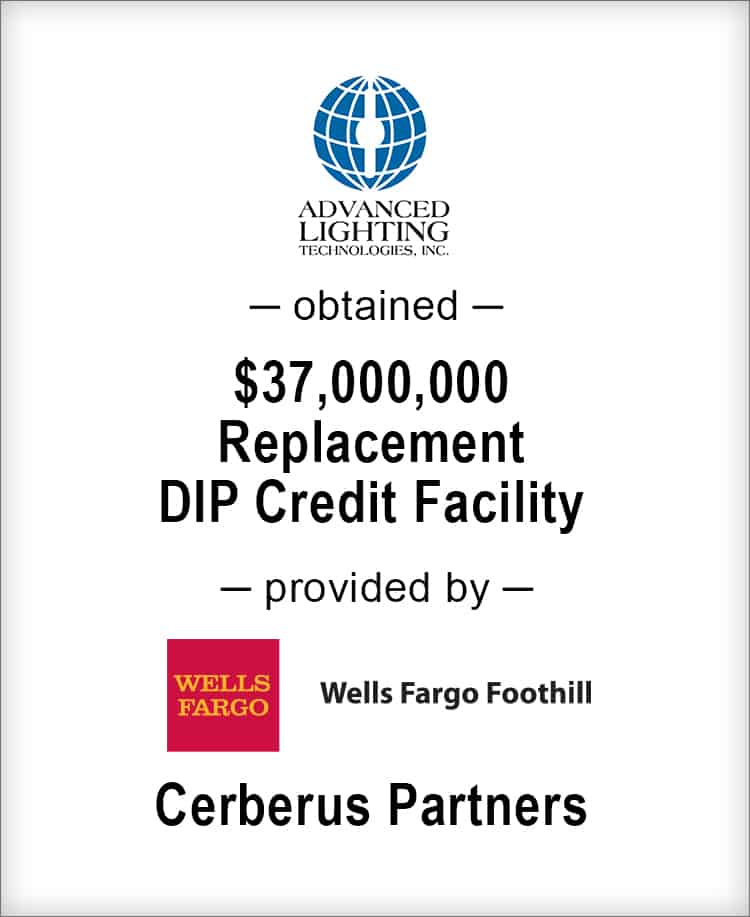 As previously reported, Advanced Lighting Technologies, Inc. (“ADLT”) successfully emerged from bankruptcy on December 10, 2003 pursuant to its confirmed Plan of Reorganization. The confirmation of the Plan of Reorganization follows several months of often contested proceedings and lengthy negotiations between the Company and its various constituents. BGL has served as lead financial advisor and investment banker to ADLT since October 2002, assisting the Company with multiple endeavors including: contemplating and preparing for bankruptcy; managing and negotiating with its former bank group and other stakeholders; raising Debtor-in-Possession (“DIP”), replacement DIP and exit financing; pursuing a DIP-ordered sale process; negotiating with various parties-in-interest for a debt and equity restructuring and/or recapitalization; raising new equity capital; providing expert valuation analyses and testimony; and completing various other advisory assignments.

Through the efforts of BGL, and the other professionals in the case, the Company was able to quickly conclude its Chapter 11 case in providing payment in full to ADLT’s creditors, and a material return to its equity holders. The creativity and expertise of BGL and the other advisors enabled ADLT to better manage and control its restructuring process. To allow an orderly and controlled restructuring process, BGL successfully refinanced the original DIP credit facility which had been provided by ADLT’s former bank group and, in conjunction with the Company and its counsel, negotiated a reorganization plan with the Official Committee of the Unsecured Creditors (comprised of holders of the Company’s $100 million public senior unsecured notes and The General Electric Company (“GE”), the holder of the Company’s $25 million face value preferred stock) involving a debt for equity conversion.

BGL was also instrumental to the transaction that occurred in August 2003, in which an affiliate of Saratoga Partners LLC purchased GE’s equity interests in ADLT and proposed a new money plan of reorganization. After lengthy negotiations this plan was supported by all major constituents of the Company, including the holders of the Company’s public senior unsecured notes. BGL assisted the Company and Saratoga Partners in raising the exit senior financing.

Under the confirmed and effective reorganization plan, an affiliate of Saratoga Partners, invested $30 million in cash and equity for the Company’s preferred and common stock. In addition, Wells Fargo Foothill entered into a $30 million senior secured credit facility. Operating management will also have a significant equity investment in the Company.

Commenting on the transaction, Senior Managing Partner and Principal, Michael E. Gibbons said, “We are pleased with the results of a complex and collaborative effort culminating in a transaction that provides for the payment of ADLT’s creditors in full, especially given the contentious nature of the proceedings at times. Particularly, it was refreshing for a company to perform admirably under trying circumstances. This strong performance is a testament to the senior management leadership of ADLT as well as various professionals who worked countless hours in consummating a transaction beneficial for all constituents involved. Further, ADLT will benefit from having a strong investor in Saratoga Partners, who is very much interested in maintaining and expanding ADLT’s leadership in the metal halide industry.”

Wayne R. Hellman, ADLT’s CEO, commented on BGL’s involvement in the transaction by saying, “BGL was intimately involved in all aspects of ADLT’s reorganization process. Their patience, creativity, fortitude and dedication were beneficial to ADLT as it navigated through its complex and contested reorganization.”