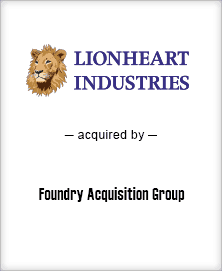 Brown Gibbons Lang & Company (“BGL”) today announced the completion of the sale of Lionheart Industries, Inc. (“Lionheart” or the “Company”) to Foundry Acquisition Group (“FA Group”) in a sale under Section 363 of the U.S. Bankruptcy Code.

Lionheart, headquartered in Salem, Ohio, is a premier manufacturer of specialized metal castings for a diverse range of industries. Lionheart filed for Chapter 11 Bankruptcy protection in April 2003 as a result of a variety of market and operational challenges coupled with significant financial leverage brought on by an aggressive acquisition strategy. BGL was hired by Lionheart in July 2003 to pursue a sale of the business.

After performing a thorough financial analysis of the Company’s four distinct business units, BGL presented the businesses to a group of potential strategic and financial investors throughout North America. Facing extreme industry challenges that included customer bankruptcy, depression of business volume, and the overall unattractive nature of the foundry business in the current market, BGL was able to successfully sell the business to FA Group. FA Group was formed as a joint venture by Company management to acquire the Lionheart businesses. “This transaction is a good example of how a greater value can be attained for a business through a competitive auction process. There were several rounds of bidding, both for individual businesses and for the Company as a whole. In the end, the purchase price was substantially higher than where the auction opened earlier in the day,” said Scott Berlin, BGL Director and senior transactor working with Lionheart.

“BGL’s investment banking expertise, tenacity, and perseverance in a complex sale process were essential to the successful sale of the Company. We are indebted to BGL’s professionals for guiding and advising us through the process,” commented Phillip Jones, Chief Executive Officer of Lionheart.

BGL was able to leverage its knowledge of metals markets and its substantial experience with financially distressed companies to generate significant interest from likely potential buyers, enabling the auction to be successful. As a result of this transaction, each of Lionheart’s four business operations have been able to remain viable ongoing businesses.