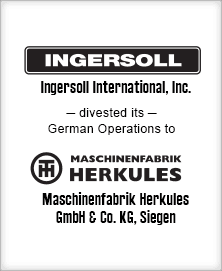 Herkules, a private German competitor of Ingersoll Germany, won the final bid in a court-administered auction after beating a competing offer from Beijing No. 1 Machine Tool Corporation (“Beijing No. 1”), one of China’s leading manufacturers of machine tools. Beijing No. 1 was interested in Ingersoll Germany’s industry-leading technology and extensive worldwide customer base, but Herkules ultimately raised its bid to acquire its larger German rival.

Among the more unique aspects of this transaction was the extensive global and multilingual marketing of the German operations of Ingersoll cooperatively undertaken by BGL and InterFinanz. The two firms contacted more than 150 potential buyers worldwide, and more than 50 expressed an interest in acquiring the business, which resulted in a highly competitive sale process and a full price for Ingersoll Germany.  After the two investment banks jointly prepared the marketing materials, InterFinanz coordinated the local management meetings with all prospective buyers and directly handled the European buyers, while BGL was responsible for marketing the business to U.S. and Asian buyers as well as shepherding the sale through the U.S. bankruptcy court.

Although BGL has completed numerous cross-border transactions on its own over the past several years, this was the first transaction that BGL has co-managed with another member of Global M&A, a network of 20 independent middle market investment banks (including InterFinanz). Global M&A was organized in the 1990s to cooperate on cross-border merger & acquisition transactions around the world. BGL, one of the newest members of Global M&A, and InterFinanz, one of Global M&A’s founding firms, were able to combine their extensive knowledge of the automation, electrical products, and machine tool industries with their bankruptcy and restructuring experience to formulate and execute a transaction strategy that maximized the value for Ingersoll International’s creditors and preserved more than 1,200 jobs in Germany and the U.S.

“This transaction highlighted the significant value of the Global M&A organization and its ability to successfully execute cross-border deals,” said Scott H. Lang, Senior Managing Director in Brown Gibbons Lang’s Chicago office and co-head of the firm.  “The secured lenders, led by Bank One, were paid in full, and significant funds remain in the estate for distribution to Ingersoll’s other creditors.”

Mr. George Dorkhom, CEO and President of Ingersoll International, stated: “We engaged Brown Gibbons Lang & Company and InterFinanz after interviewing five other investment banks, because we were convinced that they had the industry knowledge and cross-border experience to deliver the highest value for Ingersoll Germany.”