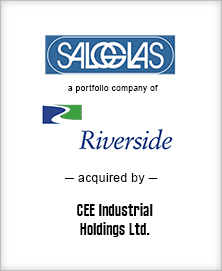 BGL’s First Global Transaction of 2007 is Smooth as Glass

Brown Gibbons Lang & Company, together with its Hungarian Global M&A partner, Invescom Corporate Finance, today announced the completion of the sale of Hungary-based Salgglas Üvegipari Rt. (“Salgglas” or the “Company”), a portfolio company of The Riverside Company, to CEE Industrial Holdings Limited (“CEEIH”), an investment company pursuing acquisitions of small to medium sized industrial companies in the Central-Eastern European region. The Riverside Company engaged BGL and Invescom to exclusively manage the sale of its portfolio company.

Salgglas, located in Hungary, is the leading Hungarian manufacturer of high quality, tempered and laminated glass, and boasts a product line that includes shatter-proof, burglar-proof and bullet-proof glass in addition to its major product lines of automotive glazing products. The company serves the automotive OEM market in Hungary and throughout Western Europe, and counts BMW and Mercedes among its customers.

“Over the past several months, the BGL-Invescom team worked tirelessly with Riverside, the Salgglas management team and our legal advisors and managed a very thorough and detailed process that resulted in the optimal transaction both for Riverside and the Company,” said Ferenc Vidovszky, partner, The Riverside Company, Budapest office. “Through the highly efficient Global M&A partnership, BGL and Invescom identified potential purchasers from a wide variety of geographies which greatly helped us to achieve favorable transaction terms.”

Michael Shaffer, vice president at BGL, said, “This has been a successful transaction for all parties involved and we are very proud to have assisted Riverside with this important transaction through a joint mandate with Invescom. During Riverside’s nine-year ownership of Salgglas, the Company underwent extensive restructuring and launched several new products that provided it a much stronger competitive position. This positioning and the significant growth of the Central European automotive market made the company an attractive purchase for CEEIH.”

“BGL and Invescom have proven their ability to capture appropriate valuations for their clients by seamlessly executing global marketing processes for a middle market company,” said Zoltan Siklosi, managing director at Invescom.

Global M&A is the world’s leading partnership of top-tier independent financial advisory firms focusing on mid-market cross-border transactions with values between $25 and $500 million. The Global M&A partnership consists of 32 members in financial centers spanning the globe. Members have completed more than 700 transactions with an aggregate deal value exceeding $20 billion since 2000. Global M&A was named 2005 Inves