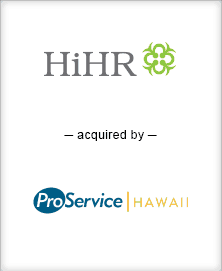 Brown Gibbons Lang & Company (BGL) is pleased to announce the sale of Hawaii Human Resources Inc. (HiHR), a subsidiary of The Hawaii Group, to ProService Hawaii.  BGL’s Business Services team served as a financial advisor to The Hawaii Group in the transaction.  The specific terms of the transaction were not disclosed.

Hawaii Human Resources is the second largest Professional Employer Organization (PEO) in the state of Hawaii.  ProService Hawaii is the state’s largest HR management firm.  The addition of HiHR’s 13,000+ worksite employees to the 24,500 already represented by ProService Hawaii brings the total to more than 35,000 worksite employees served with over $1.2 billion in payroll.

Matthew  Delaney, co-founder and co-owner of The Hawaii Group, said, “BGL’s in-depth knowledge of the PEO industry was critical in our decision to engage the firm as an advisor.  Their advice was invaluable in the transaction process.”

Jordan Conley, chief analytics officer of ProService, said, “My interaction with BGL’s senior team was instrumental in ProService coming to terms on the HiHR transaction.”

Cliff Sladnick, head of BGL’s Business Services practice, commented, “ProService’s in-market acquisition of HiHR is yet another example of why consolidation within the PEO segment continues to accelerate. Both parties and their PEO clients will benefit from a transaction like this.”