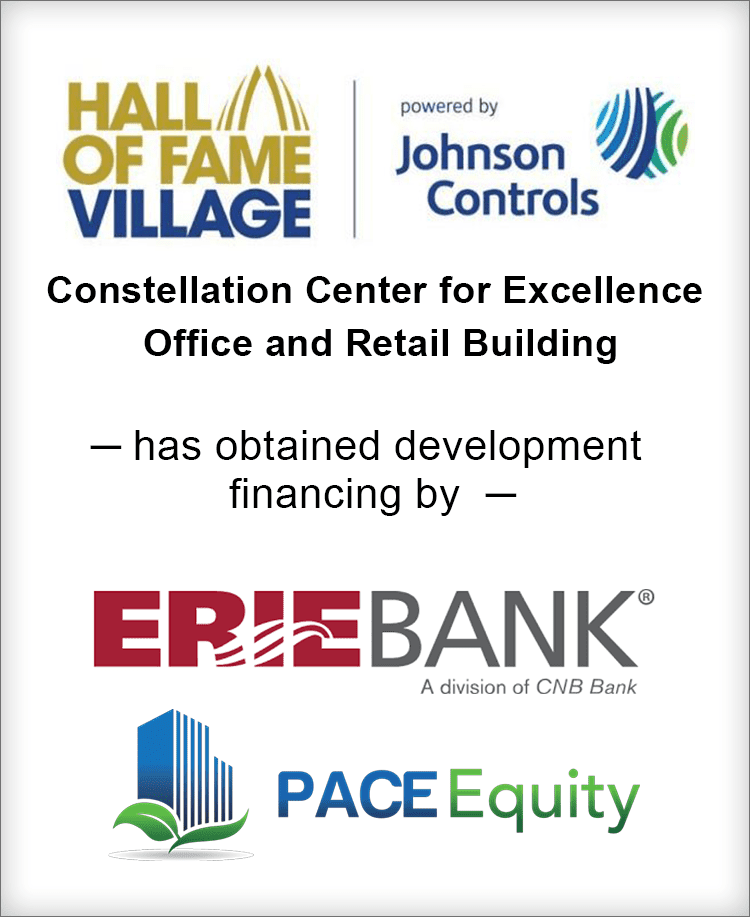 Brown Gibbons Lang & Company (BGL) is pleased to announce the financial closing of the Constellation Center for Excellence, the office and retail component of a larger mixed-use development at the Hall of Fame Village powered by Johnson Controls in Canton, Ohio. BGL’s Real Estate Advisors team served as the exclusive financial advisor to the Hall of Fame Resort & Entertainment Company (NASDQ: HOFV) in the transaction. ERIEBANK and PACE Equity will finance the approximately 75,000 square-foot Class A office and retail building in Canton, Ohio, which received its certificate of occupancy in October 2021.

The Hall of Fame Resort & Entertainment Company (HOFV) is a leading sports, entertainment, and media enterprise headquartered in Canton, Ohio. Established in 2020, the publicly traded company is the result of a business combination between HOF Village, LLC — a partnership between the Pro Football Hall of Fame and Industrial Realty Group (IRG) established in 2016 — and Gordon Pointe Acquisition Corp (GPAQ). Under the leadership of seasoned executive Michael Crawford, President & CEO of the Hall of Fame Resort & Entertainment Company, HOF Village is poised to capitalize on its unique partnership with professional football. This platform allows for the continued development of an integrated resort complex that is the Hall of Fame Village powered by Johnson Controls, as well as other gaming and media verticals.

“We continue to be grateful for the partnership and support provided by BGL, PACE Equity, and ERIEBANK, and are excited to share progress and execution on the construction front with our community, the region and all of our shareholders as a result of our great work together,” shared Crawford.

Wesley Gillespie, Regional President of ERIEBANK commented, “ERIEBANK is excited to continue our relationship with Hall of Fame Village, and we look forward to seeing the remaining phases completed. This will be a true asset to our region, and we are privileged to be a part of it.”

Beau Engman, Founder of PACE Equity commented, “Having worked with BGL on multiple transactions, they are able to get ahead of complex issues quickly and bring resolutions to the closing team. They are a great partner to work with and we value their creativity, resilience, and transparency.”

The themed, experiential, destination masterplan of the Hall of Fame Village powered by Johnson Controls includes three Phases.  Phase I is complete and includes the Tom Benson Hall of Fame Stadium, Hall of Fame Village Sports Complex, and the newly renovated DoubleTree by Hilton Canton Downtown hotel. Phase II is underway and, when finished, will include the Constellation Center for Excellence, the Center for Performance, the Fan Engagement Retail Promenade, the Play-Action Entertainment Plaza, The Eleven – A Hilton Tapestry Hotel, and the Hall of Fame Indoor Waterpark, as well as an expansion of the Sports Complex. A future Phase III is also in the early planning stages, and could include additional attractions, dining, lodging, apartments, and other accommodations. The Hall of Fame Village powered by Johnson Controls campus is also home to the Pro Football Hall of Fame Museum, and while under separate ownership, the aligned synergies complement this destination masterplan.

The financial closing for the Constellation Center for Excellence significantly reduces the cost of capital for HOFV and is a key step to effectuate the larger $300+ million Phase II development that is underway at the Hall of Fame Village powered by Johnson Controls. The strategic structuring with ERIEBANK and PACE Equity paves the way for future financings needed to complete the remaining Phase II development and further strengthens the financial position of the company.