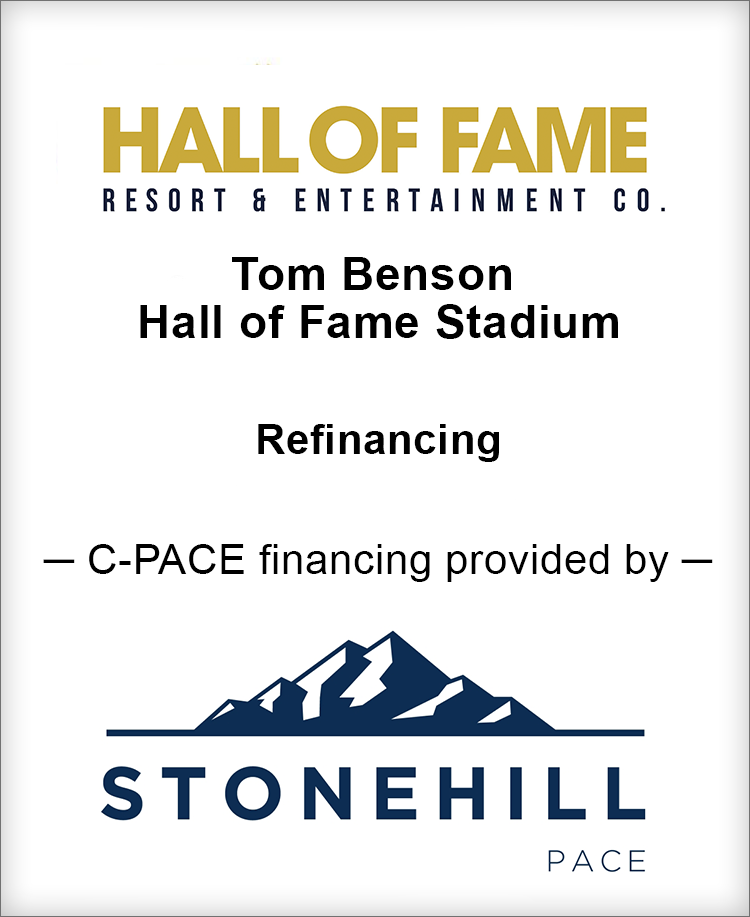 The Hall of Fame Resort & Entertainment Company (HOFV) is a leading sports, entertainment, and media enterprise headquartered in Canton, Ohio. Established in 2020, the publicly traded company is the result of a business combination between HOF Village, LLC — a partnership between the Pro Football Hall of Fame and Industrial Realty Group (IRG) established in 2016 — and Gordon Pointe Acquisition Corp (GPAQ). Under the leadership of seasoned executive Michael Crawford, President & CEO of Hall of Fame Resort & Entertainment Company, HOF Village is poised to capitalize on its unique partnership with professional football. This platform allows for the continued development of an integrated resort complex that is the Hall of Fame Village, as well as other gaming and media verticals.

The themed, experiential, destination masterplan of the Hall of Fame Village includes three Phases. Phase I is complete and includes the Tom Benson Hall of Fame Stadium, Hall of Fame Village Sports Complex, and the newly renovated DoubleTree by Hilton Canton Downtown hotel. Phase II is underway and, when finished, will include the Constellation Center for Excellence, which received certificate of occupancy in October 2021, the Center for Performance, the Fan Engagement Retail Promenade, the Play Action Plaza, a Hilton Tapestry Hotel, and the Hall of Fame Indoor Waterpark, as well as an expansion of the Sports Complex, now named Forever Lawn Sports Complex.  A future Phase III is also in the early planning stages, and could include additional attractions, dining, lodging, apartments, and other accommodations. The Hall of Fame Village campus is also home to the Pro Football Hall of Fame Museum, and while under separate ownership, the aligned synergies complement this destination masterplan.

Construction of the Tom Benson Hall of Fame Stadium was substantially completed in 2016, with continued development of the East End Zone and Constellation Center for Excellence west end zone video screen in 2021. The Tom Benson Hall of Fame Stadium holds up to approximately 23,000 spectators and hosts multiple sports and entertainment events, including the NFL Hall of Fame Game, Enshrinement, and Concert for Legends during the annual Pro Football Hall of Fame Enshrinement Week, as well as other premier sporting events such as the Historic Black College Hall of Fame Game, USFL championship games, and the Ohio State High School Football Championships, and is home to the Canton McKinley High School Football Team.

The Stadium is also equipped with cut-away seats, allowing it to serve as an elite concert venue. The Stadium has hosted performances by national recording artists such as Aerosmith, Tim McGraw, Pitbull, Toby Keith, and Maroon 5, with upcoming performances by Journey and Dave Chappelle planned for the 2022 Enshrinement weekend events.

“This transaction with the Hall of Fame Resort & Entertainment Company showcases how C-PACE financing is an advantageous financing option for different property types,” said Jared Schlosser, Stonehill Senior Vice President and Head of Stonehill PACE. “Our ability to provide alternative financing options, including C-PACE, has allowed numerous projects like the Hall of Fame Village to come to fruition with rates and structures that have benefitted all parties.”

This is the third PACE financing completed at the Hall of Fame Village, with $10.7 million leveraging the Constellation Center for Excellence, a 75,000-square-foot mixed-office and retail component, and the Center for Performance, a 100,000-square-foot exhibition hall and athletic performance space.