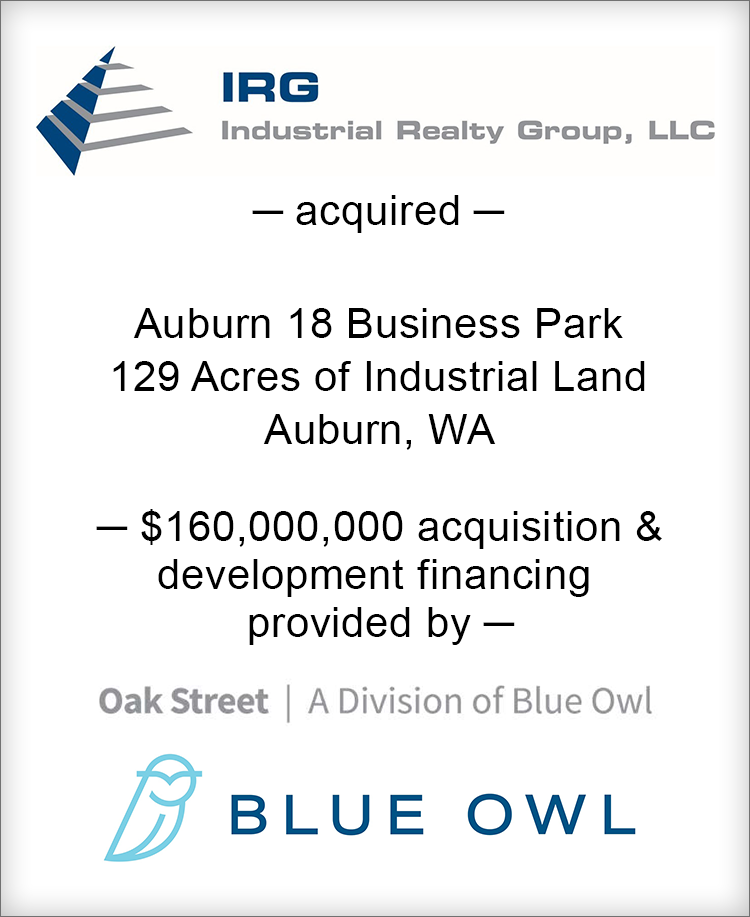 Brown Gibbons Lang & Company (BGL) is pleased is pleased to announce the financial closing of $160 million for the acquisition and development of Auburn 18 Business Park, a 129-acre industrial site in Auburn, Washington. BGL’s Real Estate Advisors team served as financial advisor to Industrial Realty Group (IRG), with Oak Street, a Division of Blue Owl, as the capital partner to IRG.

IRG is a nationwide real estate development and investment firm specializing in the acquisition, development, and management of commercial and industrial real estate throughout the United States. IRG, through its affiliated partnerships and limited liability companies, operates a portfolio containing more than 150 properties in 31 states with over 100 million square feet of rentable space.

Oak Street is a real estate investment firm focused on investing in net-leased properties. “Oak Street seeks to form partnerships with best-in-class organizations and real estate developers by creating structures that facilitate our partners’ strategic and financial initiatives,” said Colleen Collins, Managing Director of Oak Street. “We are excited to form a long-term partnership with IRG, one of the leading industrial developers in the country.”

Auburn 18 Business Park is comprised of approximately 129 acres of land located one mile southwest of the Commercial Business District of the City of Auburn. The Property is currently improved with over one million square feet of space, including two large office buildings, seven large warehouse buildings, an operations and maintenance building, and several other small support buildings located throughout the property.

Originally purchased in 1944 by the United States Army as 435 acres of farmland, the site was improved with 20+ dry storage warehouses for use during World War II. In 1962, the U.S. General Services Administration (GSA) took ownership of a 177-acre portion, with multiple WWII warehouses, three 1950s-era warehouses, an administration office, and a water tower. The remaining U.S. Army property was sold to private developers. During the 1990s, GSA donated land to the City of Auburn for a park and the Auburn City School Bus Depot. An additional 8.4 acres was donated to the City of Auburn for its municipal fire training center.

The disposal of the Auburn complex is part of a larger strategy to evaluate underutilized assets and shrink the federal footprint. IRG acquired the Auburn Federal Complex through an online auction process. Renovations to the existing eight warehouse buildings have begun and include fire and life safety upgrades, lighting improvements, and adding additional loading docks, as needed.

With excellent frontage on C Street, this perfectly positioned site offers prime visibility and easy access to WA-18, WA-167, and I-5.  The site is within two miles of the Auburn Municipal Airport and the BNSF Rail Yard, as well as various key supply chain, logistics, and manufacturing facilities, including UPS, Starbucks, Safeway, Behr, Gist USA, Boeing, Amazon, Costco, DHL, and REI.