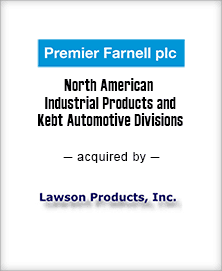 BGL named the new deal structure “Seamless Salesforce Transaction Agreement” due to its unique and complex combination of risk reduction for both buyer and seller. Michael E. Gibbons, BGL senior managing director & principal and James C. Miller, vice president, spearheaded the SSTA of Premier Farnell’s businesses with support from BGL’s team of investment bankers. The transaction was completed March, 2001, with a sale price of $36 million.

“The technique arose from an impasse in the transaction,” said Gibbons. “Premier had made a strategic decision to sell its divisions but wanted to optimize value received. BGL attempted to create a structure that allowed Lawson to receive the maximum marginal benefit from growing through acquisition. Lawson was permitted to recruit the Premier sales force with a pre-agreed compensation package. Once a predetermined percentage of the sales force was signed, the sale agreement became enforceable without any further action from Premier.”

Miller added, “This format allowed Lawson to acquire only what they wanted – Premier’s exceptional sales force, functions. Our SSTA deal structure created a win-win situation for both Premier and Lawson.”

Based in London, Premier Farnell is a global, business-to-business distributor of electronic and industrial components. Lawson Products distributes systems, services and products to the MRO and OEM marketplaces, worldwide.

The businesses acquired by Lawson provide products and services to the MRO marketplace. Kent supplies specialty, high-performance products for professional care and repair of vehicles. The Industrial Distribution Operations include Rotanium Products, Certanium Alloys, Premier Fastener, CT Engineering and JI Holcomb. They provide welding products and industrial consumables for the repair and maintenance of equipment, machinery and buildings.