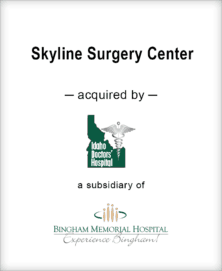 Located in Blackfoot, Idaho, Bingham Memorial Hospital is a 95-bed Critical Access Hospital. Bingham began operations in 1950 as a community hospital and has grown through multiple expansions, including the construction of skilled nursing facility Bingham Skilled Nursing and Rehabilitation Center in 1964 and the recapitalization of Idaho Doctor’s Hospital. Bingham operates as a tax-exempt, non-profit 501(c)(3) corporation and employs approximately 500 people. Following the transaction, the operations of Skyline were consolidated into those of Idaho Doctor’s Hospital.