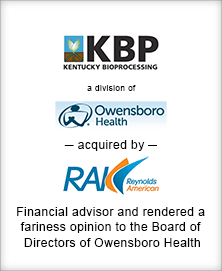 BGL Advises Owensboro Health in its Divestiture of Kentucky BioProcessing

Brown Gibbons Lang & Company (BGL) today announced the divestiture of Kentucky BioProcessing (KBP) by Owensboro Health (Owensboro) to a Division of Reynolds American (Reynolds). BGL acted as financial advisor to Owensboro and provided its board with a fairness opinion.

KBP is a biotechnology company focused on the expression, extraction, separation, and purification of plant-made proteins using tobacco plants. The Company manufactures monoclonal antibodies (mAbs), vaccine antigens, and biotherapeutic proteins. Target products include mAbs for rabies vaccines and virus-like particles (VLPs) for HPV vaccines. Additionally, the Company facilitates the growth and extraction of tobacco plant components for potential use in a variety of consumer products.

Owensboro Health is a not-for-profit health care system located in Owensboro, Kentucky. The 477-bed Owensboro Regional Hospital has been recognized by Healthgrades as a Distinguished Hospital for Clinical Excellence for the fifth year in a row and one of America’s 100 Best Hospitals in 2013. The system includes an acute care hospital, a medical group, numerous clinics, diagnostic centers, wound healing centers, a cancer center, home care services, and the Healthpark, a medical-based fitness center.

“The sale of KBP is another step in a tremendous success story. In 2006, plant-based pharmaceuticals were still largely conceptual. Owensboro Health had a great opportunity to act as a catalyst in making that concept a reality on a global level,” said Owensboro Health president and CEO Philip Patterson. “This sale is a natural transition to a long-standing partner in order to allow KBP to reach its full potential, and we are looking forward to seeing what KBP will achieve.”