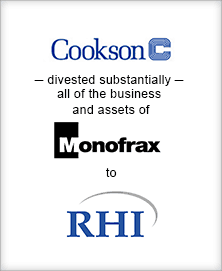 BGL Advises Cookson on Divestiture of Monofrax to RHI

Brown Gibbons Lang & Company announced today the sale of substantially all of the business and assets of Monofrax Inc., a wholly-owned subsidiary of Cookson Group plc (Cookson) (LSE: CKSN), to RHI AG (RHI) (WBAG: RHI), a global supplier of refractories. RHI acquired substantially all of the assets of Monofrax in a transaction with an enterprise value of $45 million. Cookson, the publicly-held, London-headquartered materials science group, engaged BGL as its exclusive financial advisor in connection with its divestiture of Monofrax.

Monofrax, based in Falconer, New York and founded in 1931, is a leading producer of fused cast refractories sold under the globally-recognized Monofrax® trade name. These highly-engineered refractories are extremely heat and corrosion resistant, highly-dense, ceramic blocks that are primarily used to line glass-making furnaces in order to contain the molten glass. For more than 70 years, the company has supplied refractories to almost every major glass manufacturer operating in North America, as well as many leading glass manufacturers worldwide.

Referring to his advisory team, Tony Harrison, Cookson’s Group Head of Treasury and M&A, said, “Given the obvious importance and sensitive nature of this transaction, we wanted an experienced financial advisor with global capabilities and a strong track record of successful corporate divestitures. From the onset of the engagement, we were impressed with BGL’s communicative approach, attention to detail, and commitment to service. The bankers’ dedication, professionalism, and ethical conduct formed the bedrock of a highly successful transaction.”

Michael Shaffer, vice president at BGL, stated, “Monofrax will enhance RHI’s single-source supply capabilities, establish a strong U.S. base from which to serve clients, and strengthen its position as one of the world’s largest independent producers of fused cast refractories. Additionally, the sale of Monofrax furthers Cookson’s strategic repositioning and concentration on its core businesses.”

BGL was introduced to Cookson through its UK Global M&A partner, Livingstone Guarantee, who also assisted in the global marketing of the transaction.

Cookson is a leading materials science company engaged in the provision of materials, processes, and services to customers worldwide. The company’s operations are divided into three segments – Ceramics, Electronics and Precious Metals. Headquartered in London, Cookson employs over 13,500 people in more than 35 countries and sells its products in over 100 countries. Cookson is a FTSE 250 company listed on the London Stock Exchange. Additional information about Cookson is available at www.cookson.com.