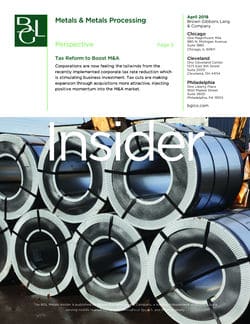 Mergers and acquisitions activity in the Metals industry could see a boost from tax reform, with the recently implemented corporate tax rate reduction stimulating business investment, according to the Metals Insider, an industry report released by Brown Gibbons Lang & Company. Tax cuts are making expansion through acquisitions more attractive, injecting positive momentum into the M&A market.

< Back to All Research
Link to bio for Vincent J. Pappalardo